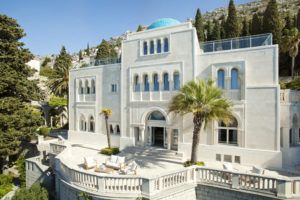 „Frenzied and full of life, swifts are the true guardians of our repetitious life reassuring us in the permanence of all things.”

Every year, since the beginnings of Dubrovnik and its gentry, Stradun’s April evenings resound with swift chirpings sensing an imminent hustle and bustle, warm days and summer on the doorstep. This is the time of the season when swifts nest in the city walls, cliffs and roofs, expecting their young during late summer and, as their parents, will return to Dubrovnik for many years to come.

Their careening flight, much like an escapade, threatening to end in a celestial collision while their high-pitched screams irresistibly remind one of an emotional discussion about anything and everything, and can make one – laugh, amused, fascinated, deconcentrated – but never leave one indifferent. And even though this “celestial disarray” may seem disconcerting to those at first encounter; citizens of Dubrovnik see them as an overture to peace and faith, whatever the circumstances may be, and that the swifts chirping shall be back in April once again. And the swifts, faithful to their Dubrovnik, even though “Dubrovnik is not what is used to be”, shall always return to it lovingly and gracefully poised high on their perches.

We perceive this game of the swifts most clearly in summer evenings, for many citizens of Dubrovnik the most beautiful time of the day, as though its residents and these skilled fliers made a pact to meet at this particular time. As everything in Dubrovnik and to its residents happens “outside”, so does the swifts cheerful chirping intermingle with conversations of Dubrovnik’s residents; interweaving like actors dialogues, awakening a symphonic  “intermezzo”, or simply ever present, enticing a smile and temporary absentmindedness. The residents of Dubrovnik may seem immune to this celestial beauty as well as to the beauty within and without its city walls; however, this is put to their demeanour so as other people may not comprehend their overwhelming excitement once the species is sighted again.

Tales of these Dubrovnik swifts have been narrated by many known and unknown visitors, numerous writers; whereas Dragutin Tadijanović in his poem “My Dubrovnik”, dedicated to his love from Dubrovnik, could not but mention the acoustic settings of the city: “… The swifts are chirping within me and orange trees are blossoming…”, alluding to his feeling of being in love. Besides the church of St. Blaise and fortifications, the swifts are of one of the most picturesque reminders to those who have visited Dubrovnik. Only a fraction of an early evening and chirping of swifts is related here; however, this can only be experienced by visiting Dubrovnik!

The scientific name of this family species is derived from the Greek απους, apous, meaning “without feet”, referring to their small legs which never touch the ground but instead cling to vertical surfaces (cliffs and/or buildings). Among the bird species, swifts are very aerial birds, where they hunt, feed, mate and even sleep except when nesting at dusk. Swifts return to their nesting habitats every year and at approximately at the same time of year (end April/beginning May), while the last swifts remain in Dubrovnik until end of October when they fly off to warmer regions. Swifts are similar to swallows, but somewhat larger and, when in flight, do not bend their wings and for which reason they can be easily recognised.  There are two typical species in Dubrovnik – the white and black swift, while grey and cliff swifts cling to surrounding rocks.

Nowhere along the coastline has there been such a multitude of the white swift (lat. Tachymarptis melba or Apus melba) species as in the Old Town (Dubrovnik). They have pale, light brown feathers, distinctive white lower areas with a brown breast streak. As it is more resistant to weather conditions than the black swift, the white swift arrives somewhat earlier and returns to warmer regions later. They roost in rock cracks, holes in city walls, facades and roofs. Their young remain in nests until ready to fly off sometime in July and/or beginning of August. Then a large flock of adult and young swifts fly off in pursuit of food, returning to the city before sunset when their chirping acoustically sets the tone of the city. Those within the Old Town sporadically fly off to warmer regions end of October.

There is also a large number of black swift (lat. Apus apus) species in the Old Town and they are a separate flock which does not mingle with the white species. Dark brown in colour with a white neck. It measures 16-17 cm, wingspan about 38-40 cm and weight around 38 grams. It was thought that this species lived to a ripe old age of 7 years; however, a 21 year old was discovered. Even though its body is tailored for flight, this of all species spends a longer time in the air among large and noisy flocks except when nesting at dusk. The black swift is monogamous and couples in love stay together for many years. Swifts feed on insects, attacks mosquitoes and flies; and, if flying low, predicates a change of weather or pending rain as the insects descend due to cooler air. The black swift arrives in May and returns to Africa end or beginning of September.

St. Nicolas is coming to Dubrovnik!